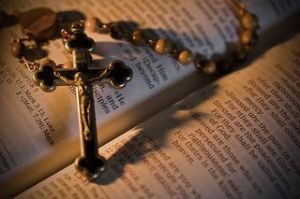 To say the least, the debate over equal rights for all people is not about to go away anytime soon. Christians of all stripes have come a long way over the years in battling inequality, making strides in the contentious areas of race relations and women’s issues, to name only two.

In most cases today, Christians confronted with racism would speak out against any form of inequality. Regarding women’s issues, the cry for equal rights is loud and strong, though in some denominations, what equality means is still a matter of debate.

In any case, whether it is an issue of race or gender, how one has been created by God is celebrated in the Christian faith. St. Paul sums up this Christian idea of inclusion beautifully in Galatians 3:28:

There is neither Jew nor Gentile, neither slave nor free, nor is there male and female, for you are all one in Christ Jesus.

However, when it comes to the homosexual community, it seems, for some Christians, the sentiment is,  All are one in Christ Jesus, except you, because you aren’t made that way, you’re choosing a lifestyle.

Now, I understand the impetus for my conservative Christian brothers and sisters to jump in here and ask, as St. Paul does in Romans 6,  “Are we to go on sinning so that grace may increase?” I understand this impetus because I understand that they believe homosexuality to be a “sin,” alongside all of the other sins that Paul names as immorality.

Let me begin with the term, Epistemology.  Loosely defined, epistemology is the study of meaning and knowledge; the nature and grounds of knowledge. It questions what knowledge is, how it is acquired, and the possible extent to which a given subject or entity can be known.

How we see things, how we know what we know, can be compared to a set of lenses through which we look at the world around us. They are our epistemological framework or, another way to say it, our paradigm.

For example, before we knew the earth revolved around the sun, our epistemological framework gave us the only paradigm we could know-everything must revolve around the earth. But, now we know that is not true.

Homosexuality is a subject that we know a great deal more about today than ever. Though the debate rages in some corners about whether it is a choice or how one is created, we have scientific evidence that homosexual activity is present in over 1500 different species. It cannot be ignored as something occurring in the natural world. As far as human relations are concerned, every gay individual that I know makes the most passionate claim that he or she is truly born with the desires that they have for others of the same sex. It is simply as unnatural for them to desire someone of the opposite sex as it is for me to desire someone of my same gender.

When looking at the Bible, we also know that the subject of homosexuality is not mentioned in the Ten Commandments, nor is it found in the Summary of the Law. There is no prophet who makes mention of it, neither does Jesus make any mention of it in his teachings.

The term homosexuality itself did not exist in any of the manuscripts, which were used to form our English Bible; it was not even coined until the late nineteenth century. Historian John Boswell gives his conclusion on the matter from his groundbreaking study:

In spite of misleading English translations, which may imply the contrary, the word “homosexual” does not occur in the Bible; no extant text or manuscript, Hebrew, Greek, Syrian or Aramaic, contains such a word. In fact, none of these languages ever contained a word corresponding to the English “homosexual,” nor did any language have such a term before the late nineteenth century. (1)
It is only in recent translations that you will find the term at all. Since the Revised Standard Version in 1946, some translators have applied the term to biblical situations they assumed corresponded to the meaning of the word. There is no doubt, however, that you would not have found the word homosexuality in any Bible, in any language, prior to 1946. (2)

So, what is written in the Bible about homosexuality, and what can we make of it?

Traditionally, the texts to which people point when making any argument against homosexuality are found in only five places in the Bible. Those particular scriptures are:

Next time, I will begin to take each of these passages in turn and give my take on why I don’t believe we are to continue to subjugate homosexuals as inferior and second-class citizens. We must look at those who are yearning to truly be who they are meant to be and surround them with love, compassion and acceptance.

Peace to you all!