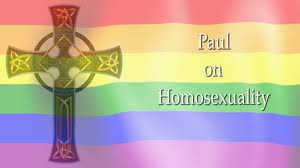 We begin with Part 6.

I say, “begin” because, for a significant number of Christians today, the Old Testament (or, Hebrew Bible) has been largely supplanted by what they refer to as the “New Covenant”–that being the New Testament.

In other words, the Old Law has been done away with and does not apply to Christians, today.  It’s only the New Testament that truly matters in terms of what is required of us in living our daily lives as Christians.  So, while the Old Testament scriptures we’ve been examining so far may be argued away as being irrelevant or no longer applying to the modern Christian, if the New Testament says that homosexuality is a sin, then the argument is over.  Maybe you’ve seen the bumper sticker:

But, the obvious next question for me is: Do the writings in the Bible (and, more importantly for most Western Christians today, the New Testament, in particular) actually mean what we’ve come to say they do?

I take us now into the New Testament passages of the Bible that many point to when they refer to what they believe Saint Paul has to say about homosexuality.

Perhaps Paul’s most significant comments on what we call homosexuality occur in Romans 1:26-27.

“26 Because of this, God gave them over to shameful lusts. Even their women exchanged natural sexual relations for unnatural ones. 27 In the same way the men also abandoned natural relations with women and were inflamed with lust for one another. Men committed shameful acts with other men, and received in themselves the due penalty for their error.”

The first thing to be remembered here (as I’ve written about this in earlier posts) is that Paul is not writing about homosexuality as we have come to understand it.  The idea and science of sexual orientation simply did not exist at the time of Paul’s writing.  What Paul is writing about here is the fallen nature of humankind, and it is in this fallen nature that humanity exchanges the truth of God for a lie.

To back up a few verses to Romans 1:16, Paul, here, lays out the main idea of his argument: that the Gospel is for all.  His intention is to unite the Jews and the Gentiles by proclaiming the message of the Gospel, that a life filled with God is a life filled with love, compassion, and understanding; in others words, a life “in Christ.”

Paul proclaims that it is only the grace of the Gospel that unites because, though everyone knew God, they rejected God anyway.  According to Paul, Jews would have known God through God’s revelation and their election, and the Gentiles would have known God because of what can be inherently known about God through the creation itself.  Paul speaks of the Gentiles, beginning in verse 19, when he writes:

“19 since what may be known about God is plain to them, because God has made it plain to them. 20 For since the creation of the world God’s invisible qualities—his eternal power and divine nature—have been clearly seen, being understood from what has been made, so that people are without excuse.”

Paul makes the point that all of humanity had knowledge of the ways of God; God had given it to all.  Yet, all of humanity rejected God, and God allowed them to give themselves over to their own lusts and evil ways.  It is the corrupted humanity that separates all people from God and it is the grace of the Gospel that restores everyone to God.  All of humanity has a choice, and Paul is making it clear that there are many who have chosen to go against the ways of God and, though they claimed to be wise, actually became fools.

In making this argument, Paul goes on to list a set of vices that would be associated with those who have rejected God and God’s ways and describes what it’s like to be one living in this fallen state.  Evidences of this way of living are clearly seen in the world of Paul and those who have given themselves over to their own lusts would have seen the consequences of that way of living.

What would not be known at the time of Paul, however, was the idea of sexual orientation.  The first century Roman world saw sexuality on a spectrum of lust, meaning, sex for procreation on the lowest end of the scale and the abandoning of relations with opposite sex partners for relations with same sex partners on the other.  In other words, the assumption would have been that everyone is created as having a natural desire for the opposite sex and then those corrupted would exchange that natural desire for someone of the same sex.  They would have given themselves over to the unnatural desires of their fallen hearts.

“The man whose appetite is insatiate in such things…will have contempt for the easy and scorn for a woman’s love as a thing too easily given…and will turn his assault against the male quarters…believing that in them, he will find a kind of pleasure difficult and hard to procure.”

What we have come to know about human sexuality in the 2,000 or so years since the writings of Paul and other first century writers, both anecdotally and scientifically, is that for many, the natural state of their existence is one in which they have a sexual desire for others of the same gender; this is what is natural for them.

My claim in this series of posts on homosexuality (as is my claim on all discussions involving the Bible) is that context is everything.  When the book of Romans is taken as a whole, it becomes clear that Paul is talking about those who have chosen to reject the ways of God for the ways of a corrupt and fallen world.  His context involves taking what God has created and called “good” and exchanging that for something opposite.  If one is created by God to naturally have a desire for someone of the same sex, then that is what is natural for him.  He has been created homosexual.

The passage is not intended to speak about gay couples who are living in loving, committed relationships.  It is intended to speak to those who are naturally heterosexual and have abandoned that natural propensity for homosexual relations.  Paul is clearly speaking of heterosexual men and women who have thrown aside what is natural for them in order to fulfill their own lustful desires.

If we were to actually take this passage seriously, knowing what we know now in our modern time, wouldn’t we have to say that it is sinful for a man or woman, who knows in his or her heart that they are homosexual, to engage in relations with someone of the opposite gender?

At the root of my fight for equality is the notion that God has created each and everyone of us just as we should be.  We are who we are, and each of us have our own individual quest to become all that we were meant to be.

It is most natural for us to be called into loving relationships with our fellow human beings.  Where love is, there is God.

In my next post, I will bring this discussion to a close as we examine the final two passages of Scripture wrongly used to condemn homosexuality.

Until then, peace to you all!