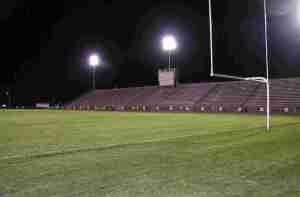 I dropped my son off at the high school for practice this morning.  He’ll be a freshman in a week and this is his first year playing organized football.  Today was a particularly special day because it was the first day the freshman team practiced in helmets and pads.

The entire fifteen-minute drive on the way there I was silent.  I didn’t know what to say.  I wanted to say something profound—give him some kind of father to son speech about what it means to take a hit and get back up no matter what, like Rocky gives to his son in “Rocky Balboa.”  I wanted to tell him to stand tall, no matter what, and never back down.  That’s the kind of thing a father says to his son, right?

I wanted to tell him that if any of the boys hurt him that he was to give me his name, and I would go over to his house and speak to his parents.  Nobody hurts my boy and gets away with it!

As we pulled into the parking lot, I realized how metaphor and reality were colliding and dancing around my brain, and I could hardly bear the irony.  My boy is growing up.  He’s about to get hit, figuratively and literally, and I just don’t know what to say.  I don’t know how I can protect him.

I didn’t want him to play, but I decided not to stop him.  He brought it up last fall and has been looking forward to joining the team for an entire year.  It’s not that I don’t love the game; I do.  It’s just that I don’t want my boy to get hurt.  Nobody can blame me for that, right?

In our modern-day world of parenting, I feel like sometimes we think we’re the ones who have taken the hits, and will continue to take the hits, so that our kids won’t have to.  But, they want to take their own hits; they need to.   I know this intellectually, but emotionally, I only want him to wrestle on the bed, with pillows all around him, like when he was four.

I patted him on the shoulder and then he exited the car with his bag, jersey and pads like it was no big deal.  I wanted to say, “Good luck!” but I didn’t want to jinx anything.  I watched him join the other boys as they got out of their parent’s cars and walk toward the field.  I felt proud and sick at the same time.  Then I drove home.

What A Life In The Theater Has Taught Me About Living