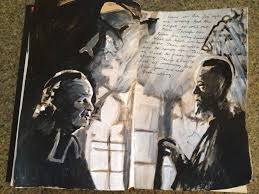 Today is a very significant day for us Americans; there is no question.  We remember the thousands who lost their lives in the terrible attacks twelve years ago, as well we should.  We remember their families and we mourn with them.

If we care to, we might also remember the tens of thousands who lost their lives as a result of the terrible years of war that followed and still trouble us to this day.

I’m just so tired of hate.

I was living in Oklahoma City when the bombing happened.  I remember it like it was yesterday.

I was getting ready for my first day of work on a brand new musical in Philadelphia on this day, twelve years ago.  It’s crystal clear in my mind.

Don’t worry.  I’ll never forget where I was on two of the worst days of my life.

But I have not given up on hope.  I have not stopped believing in what I know Humanity is capable of.  I must continue to insist that love will have the final say!

In 1848, Victor Hugo began work on a novel in which he created a character that also refused to give up on humanity.  In his enormous work, Les Miserables (clearly better known today in musical form), Hugo devotes a not so small portion of the beginning of the story to the remarkable, Bishop of Digne.

The Bishop is my favorite character in the story and I’ve been thinking a lot about him, recently.  He is a Roman Catholic priest, but his life is lived out in a manner that has nothing at all to do with his religion.  What I mean is, it is his actions that define him, not a set of beliefs he claims to espouse.

The practice of his life was to hold others above himself, to live as the embodiment of Christ.  You might say, WWJD was his code before it was cool.

Here’s how the narrator describes the Bishop’s philosophy of life:

“There are men who toil at extracting gold; he toiled at the extraction of pity. Universal misery was his mine. The sadness, which reigned everywhere, was but an excuse for unfailing kindness. Love each other; he declared this to be complete, desired nothing further, and that was the whole of his doctrine.”

Love each other, eh?  It seems too simple.

I want to learn how to love better because I’m tired of hate.

What A Life In The Theater Has Taught Me About Living