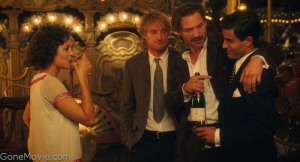 Today, for “I’m a fan, Friday” I want to share a clip that has in it a bunch of things I’m a fan of: Ernest Hemingway; Woody Allen writing; Paris, in general; Owen Wilson (yeah, I said it. If the script is good, I find him charming!); and, specifically in this clip, Corey Stoll as Ernest Hemingway (Stoll was brilliant in the first season of “House Of Cards”).

Could you imagine traveling back in time and having a conversation with one of the greats in history?  That’s exactly what happens for Owen Wilson’s character, Gil, in Woody Allen’s instant classic from 2011, “Midnight In Paris”.

Gil is a writer, and somehow during the wee hours of the morning in 2011 Paris, he gets into a vintage cab and is able to be transported back to the 1920s, a time when La Ville-Lumière was alive and teeming with some of the best writers, artists, and musicians of all time.

In this scene, Gil has a little one-on-one time with Papa. I love how Cory Stoll delivers his lines as if Hemingway were a sort of living embodiment of one of his novels.  It cracks me up every time I watch it!

Stoll and Wilson must have had a ball filming this scene!  Enjoy!