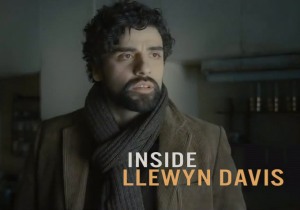 One of the functions of great art is to, as Hamlet puts it to the acting troupe about to play his scene for the King and Queen of Denmark, “hold a mirror up to nature.”

Any great work of art, whether it be a painting, a play, a piece of literature, or a film, gives us something new every time we encounter it.  We go back to great art, time and again, because of what we see when we look into that mirror.  What each of us sees can be so different because of where we find ourselves on our life’s journey.  But, that’s what makes great art great– we all see different things.

Inside Llewyn Davis, the latest film by the remarkable Coen brothers, follows Llewyn Davis, a fictional folk singer, for a week of his life in 1960.  Based in part on the memoir, The Mayor Of MacDougal Street by Dave Van Ronk, the film explores several questions that can ring true for everyone, but most especially for those of us who make our living in the arts:

How do we sometimes sabotage ourselves?

How much does being in the right place at the right time play into our success?

What’s the difference between talent and genius?

Would we just “exist” if we gave up our passionate pursuits?

Do cats really know where they are on the subway?


Llewyn doesn’t make things easy for himself.  He’s abrasive, a bit too impulsive at times, and not especially prone to making good decisions. But it’s his music that redeems him.  At the end of the day, making music is what he does better than anything in the world; it’s what he was made to do.  I related to that.

I related to his desire to make ends meet and the lengths he goes to in order to further his career.  More than that, I related to what Llewyn becomes while in the midst of performing, transcending the moment with his full concentration firmly locked on participating in something beyond himself.  Because of that, I rooted for him.  I wanted him to keep plugging away and continue to hang in there, even though I wanted to shake him by the lapels of his seasonally inappropriate jacket and say, Dude!  You could be a little nicer, man!  Especially to the people who love you and want the best for you! You dig?

But, I also related to his frustration of feeling like he’s stuck in a vortex of bad timing and thinking that those around him might never truly get what he’s trying to communicate through his work.  By employing a very effective story-telling device, the Coens show us, the audience, a week in Davis’s life in a way that makes us question whether or not he’ll ever make it out of that vortex and whether or not he could do anything about it even if he wanted to.

As an artist, the concern that others will understand you as a person is almost never as important as the desire for your work to be understood.  At the same time, it can be a very difficult blow to the confidence when the former does not occur.  Llewyn spends some time with a married couple on the Upper West Side of New York City, both of whom are college professors.   A few different times they introduce him to friends of theirs as their “folk singer friend.”  I’ve been introduced as “our actor friend” by friends of mine a time or two, myself.  There’s nothing ill intended, I know, but I related to Llewyn’s uncomfortable feelings in those scenes.

“This is what I do for a living!” he tells the hosts and their guests when they press him to play for them around the table after dinner.  He wants it to be understood that what he does is important in some way.  He wants his work to matter.  I got that.

As the film, and thus, the single week of Davis’s life comes to an end, the audience is left to speculate on how things will proceed for Llewyn.  Will his fortunes ever turn around?

Then I realized, once again, how great art can be.  I had been looking in a mirror the whole time.

Scott Langdon is an actor and writer living just outside of Philadelphia in Bristol, Pennsylvania with his wife, Sarah, and their dog, Watson. Before the Time of Covid, he could be seen on stages throughout the professional Philadelphia theater community or writing in a local Starbucks, where the only way they could get rid of him was to tell him there was a pandemic. He has a hard time knowing when he's not wanted. View all posts by Scott Langdon

A Public Sphere for Poetry, Politics, and Nature: over 400,000 monthly users