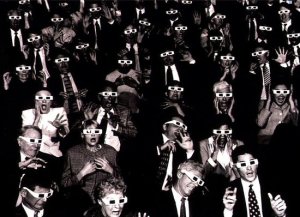 A couple of months ago, about a week before Christmas, a thought occurred to me.  As I am wont to do nowadays, I condensed it to less than 141 characters (including spaces!) and tweeted it.  Here’s what I sent out to the world:

If a gift is given with an expectation of the receiver, then there is no gift, simply and exchange of a thing.

I didn’t think much about it.  Not too much comes from any of my activity on Twitter, and that’s fine with me.

But, something pretty cool happened that day.  Somehow, Pam Grier (yes, you read that right– Foxy Brown!!) came upon my tweet and retweeted it.  What that means is that she sent my little thought out to everyone who follows her.  With my name attached to it, Ms. Grier sent my tweet to over 500,000 people.

Evidently, it registered with many of those who saw it, because a few hundred of them retweeted it themselves.  I’m not sure exactly how many people have seen the tweet to this day, but I was blown away by the power of our modern-day methods of communication.

When I think about all of that, what occurs to me is that we really have no idea how significant each one of us truly is.  What we say matters.  What we will do on this day reverberates throughout the universe in the same way waves are created by the butterfly’s wings.

Now, that might only be a figurative statement and it might also be literal, too; I’m no scientist.  But, what I do know for sure is this: whenever we do or say a thing, after we’ve done or said it, whoever receives that piece of communication makes it mean something to them.  Sometimes that meaning is life-changing.  You never know.  What happens from there is so often out of our hands.  Even so, the next move is ours, and that move begins with us releasing our intentions without any expectations of the receiver.

Let me explain what I mean in this way.

I recently closed a production of the play, The Diary Of Anne Frank at The Media Theater in Pennsylvania.  During the run, we performed several student matinees for high school students.  Many of the students had never seen a live theater production before, and this particular play is not the easiest piece to see as your first.

Throughout the performance, they reacted as most audiences prior to them had reacted.  But, every so often some of the kids reacted to certain characters and moments in scenes in ways that most adults might consider inappropriate–laughing when you might expect a more serious attitude, murmuring to one another when you might expect silence, even occasionally talking back to a character (a character, mind you, not an actor).

Some involved in the production were concerned with the reactions of some of these students in attendance, but the more I thought about it, the more I was thrilled.  You see, these kids were engaged.  They were participating in the communication.  As far as I noticed, none of them were playing with their cell phones or whispering about how they might end up missing lunch.  They were fully engaged with the story and emotionally invested in what was being offered to them.  How could we really ask for more than that?

To have someone respond to your communication in the exact manner you expect them to limits the possibilities of how you can impact the lives of another, and how they, in turn, might surprise your own life with what they can bring to it.

Recently I decided that I’m a huge fan of mystery.  I believe that faith and mystery are such close bedfellows that any attempt to remove mystery from my life has a tremendously negative effect on my faith; not just in God, but in my fellow humans, as well.

I have found that when I concentrate on giving my communication away as a truly well-intended gift and leave what comes next to the mysterious unknowing that is another’s response, my life is richer, fuller and far more satisfying.

Now, that’s not to say that miscommunication doesn’t ever happen.  On the contrary, it happens often.  But, if I take responsibility for all of my communication, both how it is released (intention) and what meaning is made from it (someone’s response), I am, myself, engaged with the world in a way that makes for a heck of a thrill ride in this life.

I pray that my intentions bless your life.  I pray that you receive my intentions in that way.  But, no matter what, I choose to participate in the great mystery that envelops all that we do and say to each other.

I wish you peace.

Scott Langdon is an actor and writer living just outside of Philadelphia in Bristol, Pennsylvania with his wife, Sarah, and their dog, Watson. Before the Time of Covid, he could be seen on stages throughout the professional Philadelphia theater community or writing in a local Starbucks, where the only way they could get rid of him was to tell him there was a pandemic. He has a hard time knowing when he's not wanted. View all posts by Scott Langdon

A Public Sphere for Poetry, Politics, and Nature